If you want to get schooled on Muddy Waters, aka McKinley Morganfield – The Chess Box collection is the way to get started. For a man that made blues music from 1941 to 1982 you’re certainly not going to capture it all in this three disc set, but you can get a good start on hearing the music that he made in those Chess records years. You get to hear classics like “Mannish Boy”, “Got My Mojo Workin”, “I Can’t Be Satisfied” and “She’s Nineteen years Old”. You’ll also hear some of his famous covers like “I’m Your Hoochie Coochie Man” (Willie Dixon), “Rolling Stone” (Bob Dylan) and “I Just Wanna Make Love To You” (Willie Dixon).

Muddy Waters was discovered by Alan Lomax who went to Stovall Mississippi to find and record country blues artists on behalf of the Library of Congress. He had a portable recorder and would record them basically right where he found them – on various plantations. Muddy was recorded just like that. McKinley was record in 1941 and received two copies of his record and twenty dolloars in the mail. He was so ecstatic that he put one copy in the jukebox on the corner and played it over and over. Alan came back one year later and recorded him again before he headed straight for Chicago where he eventually transformed the blues scene there. Part of his signature sound during the Chess sessions were Little Walter on harmonica, Jimmy Rogers on guitar, and of course Willie Dixon helping out on bass and with lyrics.

Muddy Waters – Got My Mojo Working 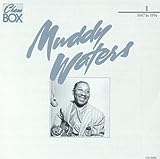